Doncaster is set to be home to the UK’s longest mural thanks to a partnership between Doncaster Creates, Frenchgate Centre, AOP Projects and street art duo Nomad Clan.

After painting large scale murals exhibiting in East Asia and the US, the Manchester-based duo Nomad Clan, will create their largest ever mural production in Doncaster, titled ‘Future’s Past and Present’.

The diameter of the mural will measure a whopping 108 metres, making it the UK's longest mural to date. It will take pride of place on the Frenchgate Shopping Centre perimeter wall, opposite Doncaster Station on Trafford Way.

Mike Stubbs, from Doncaster Creates said: “This is a very exciting project for the town and we are extremely proud to be working with internationally recognised artists, with a Doncaster background. This will be the largest mural the duo has ever painted, beating their previous works in Leeds, Manchester, London and New York and further signposting Doncaster's cultural renaissance.”

Nomad Clan - Hayley Garner and Jay Gilleard - who have been noted as 'one of street art’s finest duos' by Widewalls magazine, the world's largest street art online publication, and pegged as one of the top five female street artists in the world by The Guardian Newspaper, have been working on designs for the huge mural throughout the past 18 months.

Located on Trafford Way opposite the newly re-architected train station forecourt, Future’s Past and Present plans to be the longest paint in England and reflects some of the themes past and present relating to Doncaster and the world. It is scheduled for completion by mid-September.

Karen Staniforth, centre manager for the Frenchgate Centre said: “We are pleased to be working with the team to bring large scale street art from internationally recognised artists to the town.

“Nomad Clan has consulted with the local community and worked with key stakeholders in the town to create the mural which depicts our town’s heritage and future.

“When people step out of Doncaster railway station this will be one of the first things they see. It will be a fantastic representation of Doncaster’s heritage showcased in a modern, vibrant way.”

Nigel Ball, Cabinet Member for Public Health, Leisure, Culture and Planning, said: “We are thrilled that internationally renowned artists, Nomad Clan, are creating such a significant piece of art in Doncaster. Hot on the heels of our redeveloped train station forecourt, this impressive artwork facing towards the station will further enhance the welcome visitors receive. It will become an iconic statement marking Doncaster’s rich history and heritage.

“The painting will complement the ‘Building Speed’ public art at the train station, our recently installed mining statue, the carefully restored Gaumont frieze in Sir Nigel Gresley Square and, of course, our superb new Danum Gallery, Library and Museum. Doncaster is becoming a hotspot for great art and culture. I am excited for local people to see the artwork go up in the coming weeks.”

Nomad Clan’s Jay has strong Doncaster roots as their grandfather hails from the town. The duo have spent time in the town with local people researching the heritage of the area to help them to create the mural.

Jeff Clark, director of Art of Protest Projects, said: “When the pair collaborate, their fusion delivers an unmistakable style. Each mural has a strong significance and relevance to the environment it sits in combining playful scenes, often from local heritage, with detailed portraits of characters from the tales they hear in the local public spaces.

“The main focus of their work is to proudly celebrate local history, but on a deeper level it often highlights the socio-economic issues affecting the area.”

For further information about the project visit www.doncastercreates.org. 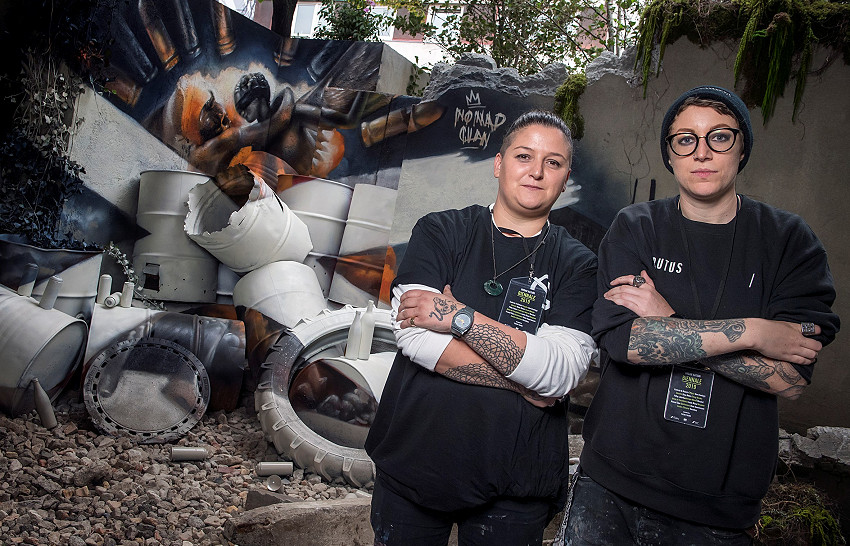