A rare treat awaits Half-Term visitors to Yorkshire Wildlife Park as a pair of hyena cubs, the first to be born at the award-winning park, start to make their debut out into the reserve. 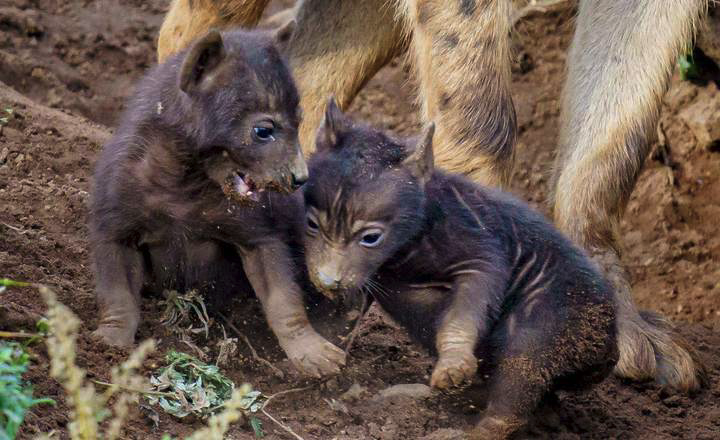 The twins, who are a month-old, are set to be star attractions as they start to venture out of their den to explore surroundings at their Hyenas of Harar reserve home in the new Explore Ethiopia section of the park.

Hyena births are extremely rare in European zoos and the October break will be the first chance for many to see these special youngsters.

Spotted hyenas are the largest of the three species of hyena who will grow to around three feet high and can weigh from 40-86 kg with the dominant females being around 10% larger than the males.

The cub's weigh around 2lb at birth and unusually are born with dark chocolate brown fur, their eyes open and some teeth already. They keep the dark brown coat for around 6 weeks before it starts to change to the distinctive spotted markings.

Granada the cub’s mother who arrived at the park from a zoo in Spain to join the cub’s father Speedy in the new Hyenas of Harar reserve at the park which was due to open earlier this year, but due to lockdown opened in June this year. The pair settled in really well together and it was not long before staff thought that there could be cubs on the way.

Granada started to dig her own den in the reserve and increasingly spent more time there. Speculation grew and eventually the tiny cubs were glimpsed at the mouth of the den looking out onto their new world.

“We are delighted to welcome these new arrivals,” said Kim Wilkinson, Carnivore Team Leader at the park at Branton, near Doncaster.

“It is wonderful that the hyenas settled well here and have bred so soon, it is more that we could have hoped for. They have spent their first four weeks of life down in the den out of sight to us all, but are now getting bolder by the day and over the coming weeks will venture further out into the reserve. Granada is a great mum and is besotted with her cubs, which is lovely to see."

The spotted hyena is found in Ethiopia and sub Saharan Africa. Although they have a negative reputation as scavengers , spotted hyena are efficient hunters and hunt over 50% of their prey. Their powerful jaws are the strongest of any mammal. They are also incredibly intelligent and have one of the most complex social set ups of all carnivores with some huge clans being made up of 70-100 individuals.

Each clan has a dominant female and a strict hierarchy. They also have a wide vocabulary comprising 11 different sounds including the ‘laugh’ that they are famous for, which is usually a sound of submission to another hyena and the distinctive whoop noise that rings out over the African bush at night, which is a call to connect with other members of the clan and call them together.

The park is gearing up for an exciting half term of Hallowe’en magic for families bringing the magic of fairy tales to life as the 150-acre park will transform into a spellbinding kingdom for Fantastical Enchanted Tales that runs from Saturday 24th to Wednesday 28th October.

Children can explore the enormous Mushroom Forest and the colourful Rainbow Woods to look for magical unicorns. There’s a spooky Witches Dungeon the ‘evil’ Queen’s Castle and even a Dragon’s Lair and visitors are encouraged to turn up in fairy tale or spooky fancy dress to add to the atmosphere.

“It is important for families to be able to enjoy the great outdoors and have fun even in these restricted times. There is so much to see at the park and the Half-Term and Hallowe’en week will bring the magic of fairy tales to life,” said John Minion, CEO.

“We are looking forward to welcoming visitors and bringing them closer to our wonderful animals and the fairytale magic. The park has been open since June with Covid precautions in place – we are on limited numbers with time slots and advance booking only so it is important to pre-book.

"YWP is over 150 acres in size with more than 5km of pathways. We have extra cleaning protocols in place, lots of clear signage and even talking signs that remind people to social distance as they go around the park. It is so important to stay safe at this time but also important for families to have something to look forward to doing together."

The park is the UK’s No.1 walkthrough wildlife adventure, that is home to over 450 animals, from 70 species including lions, tigers, giraffes, red howler monkeys and the only polar bears in England.

Limited entry is available for Fantastical Enchanted Tales and half term week and entry is by advance tickets only which can be purchased on the website: www.yorkshirewildlifepark.com