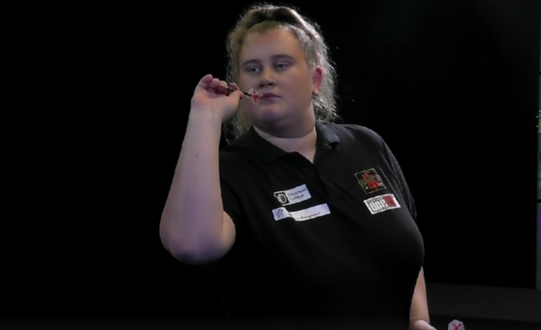 Beau Greaves is winning about everything what 2022 has to offer for her in women's darts and of course she also claimed the title at the WDF Winmau World Masters in Assen last weekend.

The English women's super-talent had not lost a leg until her semi-final (32 legs in a row), but had to fight hard against the Japanese Mayumi Ouchi. She won that match 5-4, before beating Almudena Fajardo 6-0 in the final.

''I feel absolutely brilliant. In the semi-finals I was a bit nervous. But when I came off stage I just thought forget about it. Honestly I played all right enough. It was not my best, but I enjoyed playing the game'', she told Darts Actueel afterwards.

The focus now shifts to London, where Greaves will be in action at the PDC World Darts Championship at Alexandra Palace on Friday December 16. ''I think I'm ready. Obviously the more time I go on stage it's more harder not to think about. Next week when it comes I will just do my best. If I play bad, I play bad and if I play well, I play well. I look forward to it.''

If she can feel comfortable on the biggest stage of the world? ''I think so. It's exactly the same as playing something else, it's only a stage and a dartboard. I have only got three darts and they have only got three darts, so we will see what happens. It's just about enjoying the time you have on there, because you never know when it's going to come again. Hopefully it will go all right.''