Doncaster rock star Yungblud will be pulling on his football boots for charity this weekend when he joins the annual Soccer Aid spectacular. 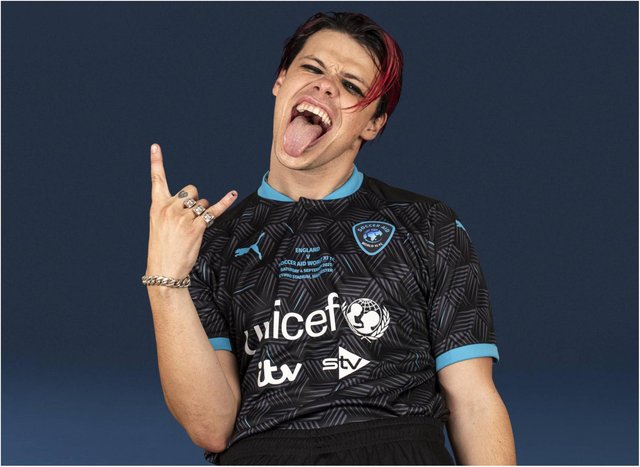 The rokcer, whose real name is Dominic Harrison, says he has been waiting for the call-up to the star-studded match all his life but admits that rock ‘n’ roll is far easier than football.

His appearance at the game at Manchester City’s Etihad Stadium on Saturday comes just days after thrilling fans at Leeds and Reading Festivals and Manchester Pride and just weeks before a huge hometown concert at The Dome.

The match is in aid of UNICEF and will be broadcast live on ITV, with winners picking up the Soccer Aid trophy from David Beckham.

He said: “It’s crazy to be taking part in Soccer Aid for UNICEF – I feel like I’ve been waiting for the call my whole life! Being asked wasn’t something I even had to think about – I said yes before I got the call.”

“I can’t wait to get back in front of an audience. My fan base are my blood and guts so I can’t wait to see them at the Etihad Stadium. I know they’ll be showing their support by buying tickets to the match.”

He added: “I’ll be nervous but also excited walking into the stadium alongside some of my childhood heroes. Soccer Aid is such a cool idea and it’s for a great cause – UNICEF. Football is a lot harder than rock’n’roll for me. I think people are maybe expecting me to be on the pitch in a leather skirt and spike bracelet, but I’ll be out there trying to win the game.

“My grandad used to take me to see Donny Rovers every week when I was a kid, so football has always been a big part of my life. Football is so important because it brings people together, on and off the pitch and gives people a chance to express themselves, which is what I’m all about.

“Buy a ticket, make a donation or watch the match – you can be part of something really worthwhile.”

Harry Redknapp returns as Manager of the Soccer Aid World XI FC, while Micah Richards and David Seaman join the England coaching team with the Sven-Goran Eriksson as England Manager.