A retired Doncaster businessman has written a book about growing up on a Doncaster farm in wartime and how shortages and hardship resulted in lifelong resourcefulness. 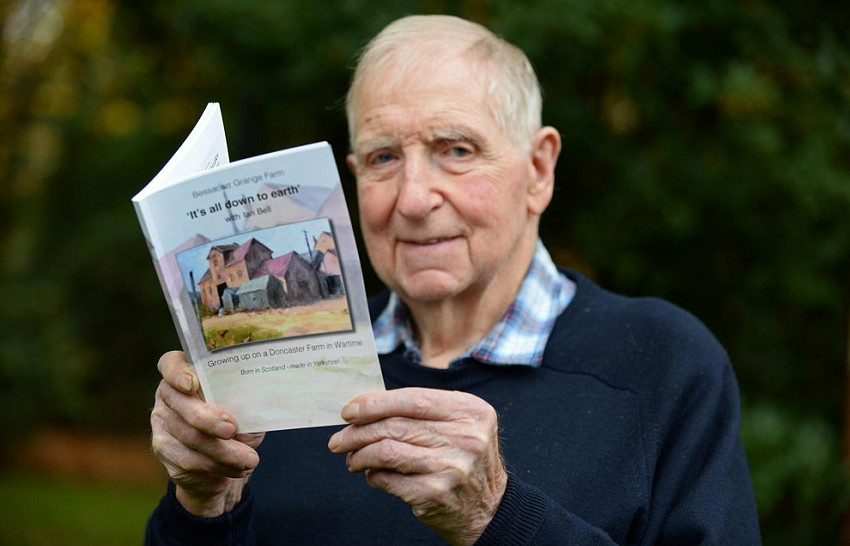 Ian Bell is 88 years old and moved to Bessacarr Grange Farm in Scotland in 1936 with his whole family when he was just three years old.

His recently published book Bessacarr Grange Farm ‘It’s all down to earth’ is an evocative and informative read spanning his life from 1936 with memories in and around the long since built over Doncaster farm and how the march of time has affected the Bessacarr area.

"It’s taken six or seven years to write It’s about all the things that happened to a young lad growing up and then going to work,” said Ian.

“It started years and years ago writing articles about farming for a for St Michael’s Church in Rossington magazine, one every month.

"Over the years people would ask me things. at one meeting one woman asked me about what happened during the war and I wrote an article for her and it just snowballed from there.”

Ian’s wife Lilian who is a former school teacher and registered blind, helped him to write the book with the help of talking computer aid. In his book, Ian adopts a theme of writing through the seasons and across the years of his life in agriculture to which he still holds an emotional attachment."That’s what farming is it works with the seasons and farming has been in my blood from the word go.”

The book also goes into some detail about the changes which have taken place in the Bessacarr area over the years and how the farm shrank in size as it was sold off and developed over until nothing was left of it.

It does cover quite a bit of local history

“We lived across from where the Wildlife Park is now. Bessacar Grange was a really old farm dating from the 1800s. – the Jarratt Estate originally rented it to us.”

The author obviously holds great affection for the farm and the agricultural life. The book details f how the crops were planted and harvested and livestock raised.

"It was hard work but you just got used to it.

“And in the war, we adopted an attitude if you didn’t grow it you didn’t eat it,” he said.

“With rabbits and everything we were never hungry despite rationing.”

Ian thought the world of his Scottish grandfather who moved down to rent the farm in the 1930s and was originally a shepherd.

He said: "My grandad John Wood Bell was my main man. He was a hard worker and as hard as nails and I thought the world of him. His name is the same as mine – I was called Ian, which is Scottish for John.

Looking back to the beginning I realise that my honest reliable and loving grandparents made me the person I am today. In farming working with the seasons month by month dominates the life of a farming family. It certainly played a big part in my growing up.”

There are vivid descriptions of the wartime years and how people survived the privation and the dangers of enemy forces.

He recounts the hair-raising time a barrage balloon slipped its moorings and demolished a wall and when a German spy plane crash-landed in nearby fields.

Over the years it was swallowed up by development and became part of the Cantley Estate and East Bessacarr.

"When that came down I was only a kid I didn’t know much about it. It came down one afternoon and it was gone the next morning,” said Ian.

“It was a secret and nobody ever had a record of that. The two men they got out of it were not in good shape – they couldn’t run away."

He adds; “There was a bomber base at Finningley and a Wellington bomber was setting off on a raid and this one got up in the air but lost power. It came down into our horse pasture bombs and everything. If that had gone off we would all have been dead.”

He remembers at the age of seven feeling the cow sheds shake as bombs exploded as far away of Sheffield during the days of the Blitz.

As the season's progress so does Ian from a child through his teenage years from driving a tractor aged 15 through the farm dances and rugby teams and meeting his fiance Lilian.

"The seasons end in December when I finish farming and I got married. My wife Lilian has pulled her weight all the way through.”

He puts his success down to the resourcefulness drilled into him working on a farm from a young age.

"It was agriculture that made me and I get emotional talking about it. In my early days I never had a bike I had to make my own,” said Ian.

“I taught myself to weld and if anything broke you had to mend it. That helped me in my later years. You didn’t go and buy something you made it.”

The book is published by Monks (Doncaster) Ltd and is available at £7.95 from the Tourist Information Centre in Doncaster and Cantley Library.