All three Doncaster MPs and the mayors of Doncaster and South Yorkshire came together at the Danum Rail Heritage Centre to sign a letter to the Transport Secretary urging him to establish the Great British Railways headquarters in the town.

Against a backdrop of two steam locomotives built in Doncaster emphasising the town’s 180-year long history of association with the railways, the five leading politicians presented the key reasons why the headquarters of the new body being set up to run the railways should be based in Doncaster.

The letter sets out how Doncaster meets all the criteria stipulated by the Government for places wanting to host the headquarters. Apart from demonstrating its rail heritage, this includes its central position on the rail network, the excellent connectivity to all parts of the country and how having the headquarters would be a major stimulus to the town and South Yorkshire, helping to attract investment and make a major contribution to the Government’s levelling up agenda.

The benefits that would come to Great British Railways from being in Doncaster are also set out, such as being at the heart of a major rail cluster and being well served by rail orientated skills providers, also the value for money that the town offers and potential sites within one minute of the station and lastly, how the bid has widespread public support not just in Doncaster but throughout the region from the Humber to Bassetlaw.

The breadth of this support is also demonstrated by the presence at the signing of leading business representatives from Doncaster and Sheffield Chambers of Commerce and the South Yorkshire LEP.

Commenting on her support for the bid, Mayor Ros Jones CBE, Mayor of Doncaster said: “Doncaster more than meets all the bid criteria stipulated by the Government, making it the ideal place in South Yorkshire to locate Great British Railways. Doncaster has been a rail town dating back to the 1840s. World famous locomotives such as the ‘Flying Scotsman’ and ‘Mallard’ were built here and families have generations who have worked on the railways or in related industries. This continues to this day with over 50 businesses in the town associated with the industry making it a natural base for the headquarters.”

Mayor Dan Jarvis MBE MP, Mayor of South Yorkshire, said: “Locating the HQ in Doncaster will be a major boost for the whole of South Yorkshire, confirming it as a centre of rail excellence, helping to attract further investment and create more skilled jobs. Doncaster and the wider region has the skills, the facilities, the potential, and the heritage to help shape government’s plans to transform the way the sector works.”

Dame Rosie Winterton MP, Member of Parliament for Doncaster Central, said: “Doncaster’s rich rail history, alongside our vibrant rail cluster and strong links to the network, make it the ideal home for Great British Railways. We have several places just minutes from the rail station that would be a perfect location for the headquarters.”

Nick Fletcher MP, Member of Parliament for Don Valley, said: “There would be no greater sign of the Government’s commitment to levelling up the area than bringing the home of Britain’s railways to Doncaster and I will continue making that case to ministers in Westminster.”

Ed Miliband MP, Member of Parliament for Doncaster North, said: “I am so proud of Doncaster and what it has to offer the whole country as the rail headquarters. This bid has united the town and region across business, higher and further education and local community groups as well as politics. I am confident that the quality of our bid means we deserve to be shortlisted and I urge the public to back Doncaster when it comes to the public vote.” 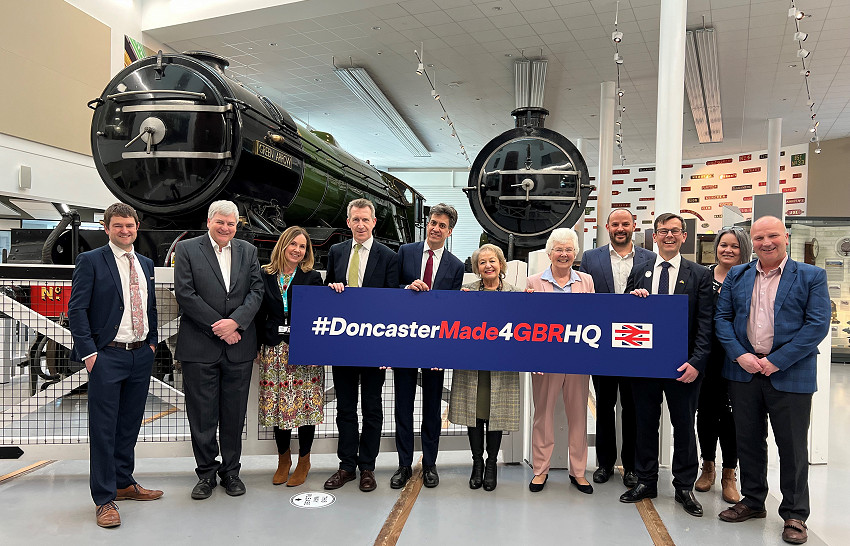